Wedding Rings? Fascinating Evolution and Old Reasons Behind a Vision

Looking at your finger, a bling that makes you half blind shines into your eyes, and a feeling of love, of being cared for, and intimacy hits you. You can’t wait to show the world what you’re wearing and what it means to be wearing that.

Whether you live in Australia or Ireland, the statement screams MARRIED all over the place. That precious little chain around your neck, I mean finger, is the ultimate proof of having pledged your loyalty and commitment to another human being. And here you are, showing it off. Even better, everybody knows what you’re showing off. But have you ever wondered how does it come that everybody knows what a ring around the finger means?

The tradition of exchanging rings dates back from over 6000 years, while the first discovered diamond ring dates to the 1400s. So how does it come that exchanging rings is such an old tradition, and where did it start?

The kings of construction, civilization, makeup and wigs, and many other things – Yes, we’re talking about the Egyptians. They were a people to admire with a capital A, and you cannot talk about the Egyptian Era without having certain awe for it. Yet, after more than 6000 years, they still manage to make your jaw drop with their discoveries and techniques. So OBVIOUSLY, they’re the first proof of tying the knot with a ring, duh!

The Egyptians were polytheistic believers. Poly-say-what-now? Yes, Polytheistic — they believed in different gods. Great, so what’s the link between me getting married with a carat- that-makes-my-arm-fall-off and ancient mummies? Patience, my love, all will become clear.

Amon-Ra, friends call him Ra, the Supreme God and God of the Sun, was so powerful that he’s also called King of the Gods. Egyptians built Pyramids in the shape that represent rays of sun shining down upon us and, therefore, worship and connect everything with Ra.

Ra is everything; he is the Creator of the universe, the air we breathe, and the love we feel. Because of him, we may live on this planet, and it’s because of him we may end on this planet. Don’t you even think about NOT worshipping and including him. Along with his brother-from-another-mother, Khonsu, God of the Moon, they represent the circle of eternity. And guess what, both are circular when in their complete phase. Coincidence? You’d wish. On top of this fact, the Egyptians believed that the open space in the ring represented a gateway to the unknown, the eternity, and never-ending cycle of life, which was a token for eternal love. Kind of creepy romantic, isn’t it?

Hold your horses; fancy rings were for Pharaohs, not ordinary people. When spouses exchanged rings, it was a beautiful, symbolic meaning, and…of hemp (or reed). It represented the God Ra and worn on the left hand’s third finger, where the Vein of Love (Vena Amoris) lays.

With Alexander the Great coming in without knocking, Greek culture adopted some of their conquered lands’ rituals. But, unlike its predecessor, who made rings out of well, straw, to say it blunt, the Greeks made it out of leather, ivory, and later metal. As eternal romantics, they loved the idea of devotion, and Eros — sorry, Cupid’s the name — had the honor to be worn by thousands of women.

…Until the Romans barged into Greece.

Romans; great strategists. And that, also in marriage. Whereas Egyptians married for love and Greeks were also pretty romantic in their philosophy, Romans were practical. For Romans, the ring represented the bridal dowry and ownership of the female partner. It was the Romans who introduced marriage between families as a legal contract. The fede ring represents two hands clasping together as a sign of agreement. A type of stamp on the marriage contract, as it were. The bride was, after all, property of her father to be handed over to her husband. If you were throwing flaps around, then the wife wore gold: proof of even more a status of her husband and the possibility to buy her. If you were a poor soul, metal would do. The wife wore the fede ring on her left hand, where the highway to the heart lays (Vena Amoris). Therefore, the husband must protect the heart and lock the love down. How’s that for a chastity belt?

Romans began to personalize their rings as time went on, shifting from the fede rings to carved ones with the couple’s head. When Jesus entered the matter in the late Roman Era, the ring would be engraved with the couple’s face and a symbol of Christianity. However, not long after, the trend returned to wearing a fede ring (1100’s), and the designs became more and more elaborate. 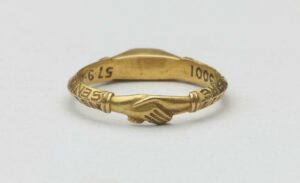 In Medieval England, getting married was remarkably simple. All the couple had to do was to offer each other their ‘agreement’ or consent. The bride and groom gave each other an object (a wed), usually a ring, and that was that. The ceremony was two times nothing and had nothing to do with the lavish parties that came later. The man simply offered the woman a ring, she accepted it, and tada! One problem: there was nobody to confirm you were married because you didn’t need to have witnesses or a clergyman. Yes, it was that easy, but it also complicated things. How would you know whose child was of whom? And there, the eyes of the church started to bling. Christian church being the Christian church, decided in the 12th Century to make marriage a holy sacrament, and so, the church ceremony was born, as was the church’s wealth. No man should place any type of ring on a woman’s hand unless he meant to get married. It wasn’t enough anymore to give it as a sign of devotion or betrothal. If you wanted to place a ring on the lady’s hand, you shall, and will, marry before God and take this seriously. So serious, that ‘till death tears us apart’ became a very literal meaning. Furthermore, as a man, you ought to wear a ring too, to remember your commitment. At least, that was in theory the idea.

In the 15th Century, the Dark Ages were alive and kicking, but that didn’t mean that romance couldn’t exist between all the horror. Posy rings – rings with a small verse from a poem carved in – were a hot thing to have back in the days. As a lot was taboo, the verse to be read in public was that too. So, the verse was inside the ring, and the wearer of the ring was the only one who could read it. Of course, marriage wasn’t that much of a free choice to many, but hey, it gives that bit of light to history.

And did you know that it was the father of the bride who sent a ring to the father of the groom, in the hope to marry off his daughter? It was widespread that the ring was a diamond ring and, in a way, stands for the beginning of the diamond engagement rings…for men. In fact, towards the 1600s, rubies stood for passion, sapphire for heavens, and diamond for steadfastness and strength. No words needed, just a ring to get lost of your daughter.

The first documented engagement ring for a woman was in1475 and totally not the custom back then. The ring went to the husband, along with everything else, not to the wife. Aside from our feminist side coming out, we surely appreciate the first engagement ring spotted at the wedding of Costanzo Sforza and Camilla D’Aragona in Italy, which came with the whole romantic package; a poem that goes like this, “Two wills, two hearts, two passions are bonded in one marriage by a diamond.”

It melts my heart when I’m reading this. The first diamond ring didn’t come long after. Archduke Maximillian of Austria gave his beloved Mary of Burgundy a diamond ring with her initial, M, formed in diamonds.

Throughout the 15th to the 17th Century, taste and refinement began to form, so jewelry changed a lot in style. The gimmel ring, a more complex fede ring, was a real piece of art and made love a puzzle. Designed to consist of different, separate rings that create a whole with a particular gliding system, it beautifully represents love and its lovers. The bride and groom would wear each a ring and on their wedding day, they’d lock it together as a whole to represent the couple as a whole. The decorations and styles were intricate and detailed with colored stones, fede hands, forget-me-not-flowers, and hearts. Later designs even have a touch of memento mori (whut?) – a skeleton and a baby – symbolizing life and death, eternal love beyond this life. Creepy.

Around the 17th Century, we leave the creepiness behind and put the diamond ring upfront. Both women and men would pledge their love to each other, not just women wore the ring. Because simple posy rings were still used, you could spice up your love a bit, and empty your wallet even more, by buying your woman a ‘keeper’ ring that she could put on either side of her wedding ring to give it that delightful accent.

It might come as a surprise, but before the 1940s, diamonds weren’t that special. With the interbellum kicking in in the 1930s, De Beers, the largest diamond company and miner, saw his purse going less heavy and launched the most significant campaign ever. Hollywood actresses would be covered in bling when appearing in movies and so, the stones were linked to romance. Pablo Picasso and Salvador Dali illustrated the ad posters to convey that message and that diamonds are works of art with the slogan “a diamond is forever.” Superstar Marilyn Monroe added some bling to the already bling by adding “diamonds are a girl’s best friend” — De Beers was back in the game. In the ’50s and ’60s, the more prominent the stone, the more your hubby loved you. It showed how much he earned and what you meant for him. 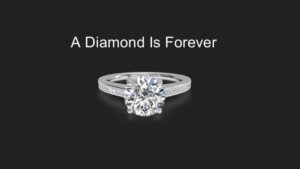 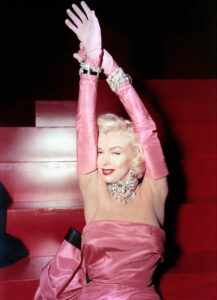 Until today, we still link love to the size of our rock. However, times and trends are changing, and more brides prefer less bombastic, more delicate jewelry. The Era of minimalist jewelry is born. 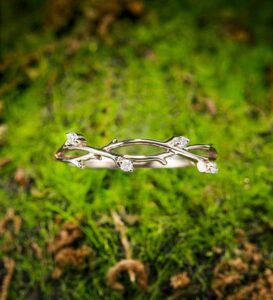 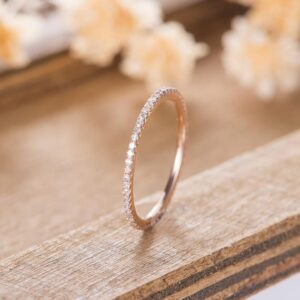